Reflections on the Book of Genesis by Luigino Bruni.

Joseph and the miracle of reconciliation/resurrection.

‘It is me. It is me, your brother Joseph.’ ‘But of course it’s him!’, shouted Benjamin, almost suffocating from joy and rushed forward, up the steps to the upside, where he fell on his knees and clasped the knees of the Newly Found One vehemently. ‘Yashub, Joseph-el, Jehosiph’, he sobbed looking at him, raising his head. It is you, it is you, of course it is you. You are not dead.’ (Thomas Mann, Joseph and His Brothers). 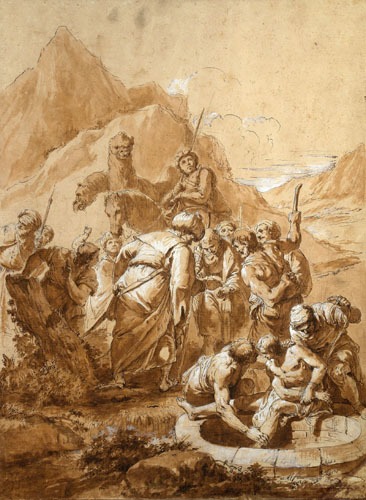 To follow the development and fulfilment of a vocation is one of the most amazing human experiences. It is a precious gift especially in times of famine of “voices” and dreams, when we long for gratuitousness, and feel nostalgic for those stories of pure charis that only those who receive a vocation can live and make us live through it.

Every true vocation – artistic, religious or civil – is therefore a public good, just as, and even more than a fountain, a forest or an ocean, because the presence of vocations that reach maturity makes the earth a better place; this earth where we all live, die, give birth and raise children. The Bible is also a treasure chest where many great stories of vocations have been kept through the ages. Just for us. To relive them, incarnate them, make them our stories, and so improve our life and the lives of all.

Joseph received the announcement of his vocation as a boy in a dream in Canaan, he saw his sheaf standing straight in the middle of the field and the other eleven sheaves (his brothers) prostrate in front of it (37:7). Only after many years and after a lot of pain does Joseph – and do we with him, now – manage to really interpret the dreams of his boyhood. Sometimes it takes a lifetime and mountains of suffering to decipher our dreams and those of others, to understand that the talents of a brother (or a colleague, a member of our community…), that had first appeared to us only as a threat were salvation for all instead.

‘I am Joseph! Is my father still alive? …I am your brother, Joseph, whom you sold into Egypt.’ (45:3-5) The culmination of the cycle of Joseph is entrusted to a few, very human and wonderful verses. Up to this cry-out Joseph was a brother only as the son of the same father; now he becomes a brother again through a new bond of brotherhood generated by pain and love. Brotherhood “by blood and nothing else” has never saved anyone, and it often becomes the cause of injustice, privilege, discrimination and violence. Joseph’s first, natural brotherhood had died along with the goat in whose blood the brothers dipped his royal robes in order to simulate death to Jacob (37:31). Now, after the years in Egypt, Joseph and his brothers are reborn into a new brotherhood that rises from the dead of the one by blood.

In that cry, next to the word brother we also find the word father: ‘Is my father still alive?’ Brotherhood and fatherhood. Throughout the cycle of Joseph, which is a great narrative on fraternity, his father Jacob and his mother Rachel are by no means absent. They are a constant presence, they are essential co-protagonists of that story, even if they are only in the background to make room for the process of metamorphosis of the brotherhood among their children.

Biblical fraternity, unlike that of the French Revolution, is not a brotherhood without or against fatherhood. Paternity and maternity tell about history and common destiny, and are the root and chord (fides) binding us to each other through time. Unlike the paternity of the great Greek myths (denied in Oedipus, or awaited by the sea in Telemachus), biblical paternity is at the service of fraternity, because it is the memory of the Covenant and the fulfilment of the Promise. Paternity/maternity are also the place where fraternity gets reassembled: Isaac and Ishmael meet again at Abraham’s bedside, Esau and Jacob next to Isaac. Genesis tells us that we can only truly be reconciled through a pact, mutually believing the same promise, a common journey again. This reconciliation takes place in Egypt, away from home, but under the sign of a father, even if a distant and not too authoritative one.

‘Then he fell upon his brother Benjamin’s neck and wept, and Benjamin wept upon his neck. And he kissed all his brothers and wept upon them. After that his brothers talked with him.’ (45:14-15) When Joseph was with them in Canaan, his brothers ‘could not speak peacefully to him’ (37:4). Now the brothers speak with another type of peacefulness that is new and more beautiful. The most telling sign of broken relationships is not to talk to each other anymore. There are few nastier experiences than that of work colleagues or neighbours who do not talk to each other, not because they do not know each other, but because, as a result of conflicts, they stopped talking to each other. The word, the daily bread of our relationships, disappears, along with good life, joy, and often the enterprise itself, too. When we do not talk with our colleagues, or we do not talk to each other ‘peacefully’, we get up with a bad feeling in the morning, work hours never seem to end, and sometimes we even get ill. Silences in relationships are always very sad, but they become even more sad and inhumane when there is no more talk between brothers and sisters who live under the same roof. Here the word that dies out does not only take away the joy: it makes us “die”, it takes the blessings off our work and lets our children grow up poorly (the first deed of love for a child is to try to give them recomposed primary relationships). When it happens that you start to ‘speak peacefully’ again after years of wrongful and terrible silence (and, thank God, it happens because the world is loved, even if it has forgotten about this), the first words are almost always tears and speechless kisses of peace (‘he kissed all his brothers and wept upon them’). These are the first words that we manage to say to each other, especially when we have to be forgiven: ‘But his brothers could not answer him…’ (45:3).

If we read between the lines of this reconciliation we discover a new dimension of Joseph’s vocation which becomes fundamental in the new fraternity. Until the revelation was given to him he had first dreamed, then told his dreams, and finally became an interpreter of the dreams of others. To rebuild the relationship with his brothers, Joseph does not interpret dreams anymore, but becomes the interpreter of a story, the story of their fraternity that was denied and then rebuilt. Now his gift is to offer a saving interpretation of the facts of the past. He does not blame anyone, he does not take revenge, he doesn’t condemn them – instead, he pronounces the only words capable of bringing reconciliation: ‘And now do not be distressed or angry with yourselves because you sold me here, for God sent me before you to preserve life.’ And he concludes: ‘So it was not you who sent me here, but God.’ (45:5-8).

We are facing a masterpiece of the art of reconciliation after deep wounds. Joseph, the victim, takes upon himself the evil that his brothers had done to him and their father, and creates a more beautiful interpretation for it, the only form that has the capacity to heal and reconcile: ‘It wasn’t you, but God’. There are no other words that could cure the betrayed brotherhood. We need words that help us take a different look at the past, words that love it and save it. To cure a great betrayal in depth, we should do everything to find a reading of the facts that show the good that was born from what was evil. These readings by the victims (and only the victims can do them) are neither simple nor painless, because they must be true and not made ??up, and it takes a lot of effort to find a good truth that is truer than that which appears to the eye. Without these transforming interpretations with the power of resurrecting dead relationships, reconciliations are fragile, and upon the first crisis there is a return to demands, accusations, guilt; and the old wound starts bleeding again. ‘Your selfishness has caused many losses to our company and enormous suffering to our family. But over the years they made all of us mature, and thanks to that pain, we can now start a new life, an even more beautiful one’. The evil done remains evil (‘…your brother, whom you sold into Egypt’), but the chance to really start over depends on the interpretation of the fruits of life born out of the evil done and suffered. Even the morally high moments of the history of the peoples are the result of different interpretations of the past fratricides in order to resurrect them into a present of fraternity. We did that, and therefore we can and know how to do it. These difficult interpretations of the past are collective experiences, but they do not take place without the presence of at least one “Joseph”, one or more concrete and great persons/victims who are capable of using different words.

The word creates and it is effective: this is one of the great gifts of Genesis. The story of Joseph tells us something new: the word is able to re-create our broken relationships, make them rise from their graves/pits where our wickedness keeps throwing them. It is possible to cure the wounds of our brotherhood through words, by providing interpretations of the stories that help to bring them back to life. It is the possibility of another fraternity, deeper and more universal than that of one blood, the greatest gift that Joseph continues to give us. If the Bible sought to place a fraternity that died and was resurrected into the heart of the history of the Covenant and the Promise, then the miracle of a fratricide turned into a new fraternity is possible; it is part of the human repertoire. And so it can be repeated everywhere and every day – even today.