Some revealing details have surfaced concerning the affair involving the so-called “clandestine” bishop ordained without the Pope’s consent. Negotiations between Beijing and the Holy See seem to be targeted. But the reaction of many “clandestine” bishops, priests and lay people is enlightening and comforting 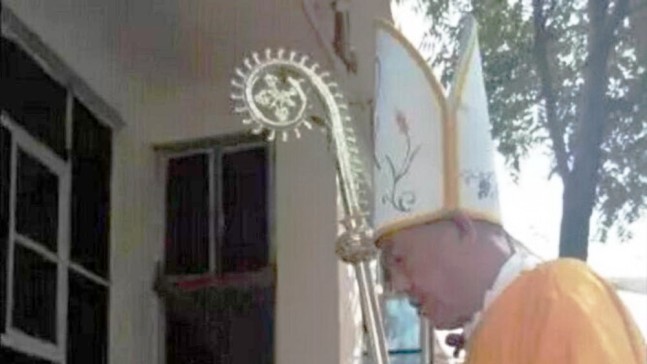 There are many murky aspects to the affair involving the so-called bishop and his episcopal ordination, which happened without the consent of the Holy See. One of these, is the supposition that this ordination may, in fact, never have taken place. But as time passes, revealing details are coming to light regarding and surrounding the “Dong case”. They are all pieces of an ecclesiastical policy operation in which ongoing negotiations between Beijing and the Holy See over the current and future condition of China’s Catholic bishops are the ultimate target.

The information the so-called bishop gave regarding his ordination appears reticent or – perhaps – deliberately obscure. According to reconstructions that have been circulating on Chinese Catholic blog, only last May Paolus Dong apparently started publicly dropping hints that he had been ordained a bishop in the past – in 2005 – and that he had followed orders from the Holy See to kept his ordination secret. Now, the “hidden bishop” has apparently decided to come out into the open and to start exercising his episcopal duties, to address the “state of emergency” , which in his opinion, was triggered by new developments in relations between the catholic Church and the People’s Republic of China. On occasion, speaking to different people, Dong provided vague and contradictory information regarding the consecrator, affirming and later denying that he had been ordained by elderly bishop Casimirus Wang Milu who has been mentally unstable for some time. Dong told UCANews agency that he in turn had illegitimately ordained another bishop but refused to name him, in order to prevent pressure from China’s government from mounting.

The reticent and contradictory versions of the story given by the so-called bishop seem to have been purposefully spread to create confusion, making it difficult for the Holy See to offer a resolute response to such a delicate question. Backdating his alleged “secret ordination” to the distant 2005, seems like a deliberate attempt to ensure it was not bound by the provisions contained in Benedict XVI’s Letter to Chinese Catholics published in 2007. In this magisterial text, Ratzinger officially revoked special powers – which had in fact already been suspended for some time – that, in light of the emergency situation created by persecution in the 1980s, allowed Chinese bishops to celebrate episcopal consecrations without even a preliminary approval from the Pope.

While many of the aspects of Dong’s alleged episcopal ordination remain cloudy, the thinking behind it has tell-tale traits. The so-called bishop himself mentioned them in his statement on tianzhujiao.online on 2 September. In those few lines in which Dong uses often disjointed language, he describes the dialogue between China and the Holy See as a manifestation of the “Great Apostasy” which according to St. Paul will precede the return of Christ. He misleadingly referred to the reflections made by Cardinal Joseph Zen last June, in which the Bishop Emeritus of Hong Kong, thinking as an adult and conscious Catholic, suggested individuals follow their own conscience in judging any potential agreements between China and the Holy See. Furthermore, Dong held that “Fan’s 13 points” – the memorandum circulated by Bishop Joseph Fan Xueyan back in 1987 – urgently needed to be looked at again and followed. Amongst other things, these 13 points urged faithful in the clandestine section of the Church not to receive the sacraments in churches served by priests and bishops that were “collaborative” with China’s religious policy.

The reference to “Fan’s 13 points” is laden with implications. In the 1980s, while the days of the bloodiest persecution during the cultural Revolution began to fade, Fan had played a frontline role in the affairs of the so-called “clandestine” section of the Catholic community, which refused to submit Church life to the rules and “patriotic” oversight bodies tied to the civil authorities. Back then, he played a key role in the quick expansion of a network of “clandestine” Chinese bishops who were not recognised and were often outlaws, wanted by the security apparatus. He acted on the basis of the powers conferred to him by Pope John Paul II, to conduct episcopal ordinations without so much as warning the Holy See. By bringing up the “13 points” again, Dong seems to be saying that the current situation, with a possible agreement between the Holy See and China’s communist government on the horizon, constitutes a “state of emergency” similar to that witnessed in Fan’s days. Dong seems to be suggesting that this should be addressed through the granting of “extraordinary” powers, similar to those granted back in the 1980s. That includes the power to ordain illegitimate bishops without the consent of the Successor of Peter.

The trial balloon launched by Dong aims to verify whether the conditions are right to create a network of new “underground” bishops, like in Fan’s days, that would be ordained without prior papal consent. This time, they would have to be prepared to “resist” the potential consequences of an imminent agreement between communist China and the Holy See. The encrypted message is obviously aimed at the clandestine communities. But it is these communities that have sofar given the brightest and most relieving response to the dark provocations of the so-called bishop Dong.

Clandestine communities on the Pope’s side, always

On 13 September, in the face of the Holy See’s silence and without any need for external instructions, 81-year-old Julius Jia Zhiguo, the legitimate bishop – recognised by the Holy See that is – of the diocese of Zhengding (which so-called bishop Dong claims he holds the title to), sent a communiqué round to the priests in his diocese, announcing that Dong had incurred a latae sententiae excommunication because his episcopal ordination took place without the consent of the Holy See. Bishop Jia, whom local clandestine Catholics see as a standard-bearer, is admired and followed for the evangelical simplicity with which he carries out his episcopal ministry. He has been put in prison or placed under house arrest on a number of occasions, even in his later years, for continuing to serve as a bishop, without the Chinese government’s recognition. Various local sources report that a few years ago now, bishop Julius Jia suspended Fr. Dong from the priesthood. In some private conversations, Dong himself stated that his decision to “take possession” of the Zhengding diocese became “necessary” after the contact the elderly Julius had had with government bodies over the renovation work needed on some churches. According to Dong, his decision to co-operate with the civil authorities made him ipso facto an “official” bishop and the clandestine bishops of Zhengding therefore needed a new bishop whom “they could trust”.

Jia’s immediate reaction is in itself a reflection of the sensus fidei that has safeguarded and guided pastors and faithful of clandestine communities, even in the face of today’s uncertainties. Chinese Catholic blogs are abuzz with expressions of opposition from Catholics who are establishing a cordon sanitaire around the initiatives launched by the so-called bishop Dong. So far, the most lucid and long-sighted words in defence of the people of God against the chaos of “operation Dong”, have come and continue coming from “clandestine” bishops and priests: “Let us take this as a lesson from history,” urged clandestine priest Paulus Han in his widely read blog. “We should not let ourselves be confused and frightened by these people, who play their game and use “loyalty” as a keyword, when in actual fact they are instigating a revolt. Let us invest our energy in promoting the unity of the Chinese Church instead of hiding inside our little circle to convince ourselves that we are the only ones who are “right”, or worse, to spread turmoil”. Joseph Han Zhihai, “clandestine” bishop of Lanzhou seconded him: “this affair”, bishop Han told Vatican Insider, “has shown that in China too, the good seed of faith grows among weeds. There are many whose thirst for power drives them to take advantage even of the simplicity of faithful. I feel mortified and helpless. But I also feel that this is part of the process that is going to lead to the Gospel flourishing in our country. We are trying to shed or clandestine status in order to experience the Gospel better within our context. Our brothers in the “official” communities are doing the same, they are passionate about bearing witness to their faith in Christ and they certainly cannot be accused of sacrificing the Church’s doctrine”. Joseph We Jingyi, “clandestine” bishop of Qiqihar is of the same mind: “We are simply happy to walk beside all those who are in communion with the Pope. Nothing else matters to us.”

“Operation Dong” has revealed the sensus fidei – testified by many representatives of clandestine communities – in objective terms. But according to some interpretations that are going round, the affair is a symbolic demonstration, a sort of “rash” caused by unease between the clandestine communities over the dialogue process which the Chinese government and the Holy See are engaged in. “Beneath the surface, you can see the frustration felt by some “clandestine” circles toward Rome. They do not understand the negotiations going on between the Holy See and Beijing,” Eflises d’Asie (EDA) writes. The media outlet of the Society of Foreign Missions of Paris (MEP), which used to host articles by passionate missionaries and experts on the Chinese question such as Jean Charbonnier, reports that there are rumours about the existence of “between five and ten” bishops in China who have been ordained within “clandestine” communities without the Pope’s consent. Far from being boiled down to an isolated case involving a mentally disturbed individual, EDA says Bishop Dong’s “discovery”, which has received so much media attention, is a warning about the “very real risk of a schism developing within the Chinese Church,” having failed to heed the alarm bells set off by the “feeling of isolation” among clandestine Catholics.

Thus, “operation Dong” becomes a cue for dumping the blame on the Holy See and its methods when it comes to dealing with the Chinese government. The difficulties and problems marking this delicate phase – including the case of the so-called illegitimate bishop of Hebei – are exploited by circles and groups – which are mostly active outside China – who are currently set on contesting and possibly preventing an agreement between Rome and Beijing. Even at the cost of casting the shadow f the schism across the entire clandestine community. Joseph Wei’s reaction to these sophisticated manoeuvres is one of indignation: “We remained loyal to the Pope and to the Roman Catholic Church even at the cost of humiliation and suffering and we remain so now, as the Holy See negotiates with the Chinese government to resolve existing problems,” the “clandestine” bishop of Qiqibar said. “We know there may be risks but we don’t expect everything to be ‘guaranteed” before commencing the journey. We are Catholics because we trust in Jesus and so we trust the Pope. The idea that we would be prepared to rebel against the Pope right at this very moment in time, after all we have been through, remaining steadfast in the faith, is an insult to our intelligence.”