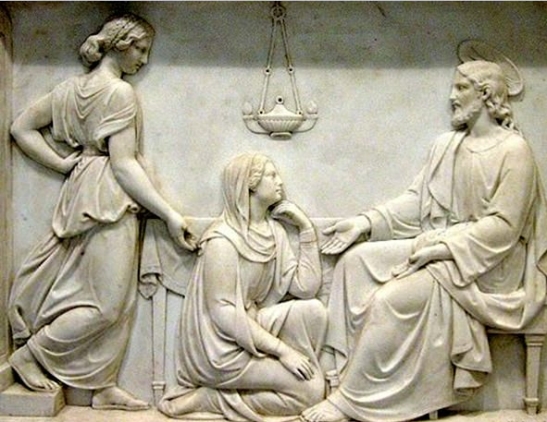 Christ the Guest, But not for One Day
Gospel reflection  – Luke 10: 38-42
Fernando Armellini

“For we are strangers before you, settlers only, as all our ancestors were. Our days on earth pass like a shadow” (1 Chr 29:15). The lesson that Israel has assimilated from the experience of the desert is captured in the words of David; he lived in tents, was homeless, asked hospitality from other peoples and often was refused (Num 20:14-21), so he has learned to appreciate the welcome.

Rashi, the famous medieval commentator of the Scriptures, reminded his people: “Even if the Egyptians threw in the Nile our new-born males, we must not forget that they welcomed us in time of need, during the famine in the time of Joseph and his brothers.”

For Christians, hospitality is a reminder of their status as pilgrims in this world. But it recalls them above all that Christ came into the world as an alien: “He came to His own, yet his own people did not receive him” (Jn 1:11). Today he continues to ask for hospitality: “Look, I stand at the door and knock. If you hear my call and open the door, I will come in to you and have supper with you, and you with me” (Rev 3:20). He asks to enter into the life of every person, every society, and every institution.

Jerusalem did not recognize the time and the visitation of her God (Lk 19:44). She remains always hesitant and undecided when Jesus knocks at the door. She hesitates before opening the door because she intuits that his word will eventually upset the whole house. We would prefer, that at least he would not visit some corner. We would like to reserve him for ourselves, leaving him in order according to our liking.

When, during the mass, or in a Bible meeting I happen to read this passage, at the end I carefully scrutinize the faces of those present, trying to guess their reactions. I generally see rather embarrassed faces and there I throw out the challenge: “It seems that you do not completely agree with what Jesus said to Martha.”

At this point, the winks, smiles, whispering comments all hostile to Mary begin. The disapproval is unanimous even if one does not have the courage to express it. Someone equally dares to joke: but how can one scold a woman who works and praises a slacker? It is comfortable to sit in prayer while others are busy!

A further complication came from the mystical interpretations of this passage. Some cite this to demonstrate the superiority of the contemplative over active life. It says that the nuns and the monks—who in the peace of their cloisters spend their lives reciting prayers—have chosen the better part. The diocesan priests instead, absorbed by many parish activities and lay people who are dedicated to charitable works, even if they perform sacrifices and renunciations, would be less spiritually perfect.

Understood in this way, the teaching of today’s Gospel—let’s face it—is at odds with that of last Sunday’s. There Jesus praised the Good Samaritan who had been busy, today he seems to offer a woman who does not move a finger to help her sister as a model.

The use of this text to contrast the contemplative life to the active is also due to a mistranslation. In the original Jesus does not say: Mary has chosen the better part, but simply has chosen the good part, that: while Martha gets carried away by agitation, Mary makes the right choice, acts as a wise person. Let’s see why.

Martha, the oldest, puts herself to work immediately. Her feminine sensibility suggests that a glass of good wine and a plate of tasty meat, served with kindness, show more affection than any talk for a person. Mary, the youngest, instead of working in the kitchen, prefers to stay seated to listen to Jesus. It is at this point that between the two sisters a quarrel erupts that will end up involving the quest.

Before entering the central theme, we clarify a detail of the story: “Mary sat down at the Lord’s feet to listen to his words” (v. 39). The position taken by Mary disclosed: she sat down at the Lord’s feet. This is not a trivial information, because the original text accentuates the detail: “Mary, who was even sitting at the feet of Jesus.” It is an expression that has a very specific technical value. At that time it served to indicate the inclusion of a rabbi among the disciples. It was applied to those who regularly and officially attended his lectures. In the Acts of the Apostles, for example, Paul proudly recalls, “I was educated in the school of Gamaliel” (Acts 22:3), that is, I was a disciple of the most famous of masters of my time.

Is it strange that Mary is presented as a “pupil” of Jesus? Not for us, but, at that time, no teacher would ever accept a woman among his disciples. The rabbis said: “It is better to burn the Bible that put it in the hands of a woman”; and also: “Women don’t dare to pronounce the blessing before meals”; and then further: “If a woman goes to the synagogue, let her be hidden, not appearing in public.” This mentality was so widespread that it also infiltrated the early Christian communities. In Corinth, for example, it abided for a time, to this standard: “Let women be silent in the assemblies. They are not allowed to speak. If there is anything they desire to know, let them consult their husbands at home. It is shameful for a woman to speak in Church” (1 Cor 14:34-35).

Since this is the mentality of the time, it is easy to understand how revolutionary was the choice of Jesus to welcome also women among his disciples. And while we’re at it, we can recall that even the opening phrase of the story contains the same challenge: “A woman called Martha welcomed him to her house” (v. 38). At that time it was considered highly improper for a man to accept the hospitality offered by women. Perhaps it is not by chance that Luke does not mention his brother Lazarus who is remembered only in John’s Gospel (Jn 11; 12:1-8).

It is the beginning of the new world: all the prejudices and discriminations between man and woman—the legacy of a culture and of pagan inheritance—are denounced and overcome by Jesus.

A second important observation on this v. 39: it does not say that Mary is absorbed in prayer, that she is “contemplating” Jesus, but that she listens to his word. She does not listen to the words, the chatter, but the Word, the Gospel. We cannot, therefore, call on her to justify the devoutness and religious introspection. Mary is the model of those who give priority to listening to the Word.

And now we come to the most difficult point in today’s Gospel: the enigmatic response of Jesus to Martha (vv. 40-41).

If the question is posed in terms of reproach to those who work and praise of the idle it is difficult to agree with Jesus. But is this what he means?

First, it should be noted that Martha is not reprimanded because she works, but because she is agitated, anxious, worried. She is troubled by so many things, and above all, because she is committed to working without having first heard the Word.

Mary is praised, it is true, but not because she is a slacker, pretending not to notice the work in the kitchen. Jesus does not say that Martha is wrong when he reminds her of the concrete commitments; he does not suggest Mary to be crafty and let her sister busies herself all alone. He just says that the most important thing, to which priority should be given—if we do not want to reduce our business to agitation—is listening to the Word.

Let’s make a summary of what we said. We certainly do not care much to know that one day, in the presence of Jesus, the two sisters have bickered. Luke mentions this incident as a lesson of catechesis to Christian communities of the past and of today. He knows that in them there are many people of good will, many disciples dedicate themselves to the service of Christ and the brothers and sisters. They are generous with their time, effort, and money. Yet even in this intense and generous activity, there lurks a danger: that much feverish work is separated from hearing the word, and becomes anxiety, confusion, nervousness, just like that of Martha. Even the apostolic commitment, communitarian choices, pastoral projects not guided by the Word are reduced to vain noises, broken stirring of pots and ladles.

Mary has chosen the good part because she has heard the Word. Even the other Mary, the mother of Jesus, is praised for the same reason: because she was attentive to the Word (Lk 1:38.45; 2:19; 8:21). It is curious: the models of listening to the Word that we get in the Gospels are all represented by women! Could it be because they really are more sensitive and more willing than men to listen to the Master?

The passage ends with the words of Jesus to Martha (vv. 41-42), but it seems unfinished. The dialogue between the two should be continued, but Luke does not report it. He seems to want to draw the attention of his readers to another detail which can go unnoticed: the silence of Mary.

Throughout the story Mary does not say a word, not even to defend herself, to clarify her position or explain her choice. She is silent and it leads to suppose that her silence—a sign of meditation and internalization of the Word—is prolonged even beyond.

It is Martha who now needs to sit at the feet of Jesus to listen to and recover the calm, the serenity and inner peace.

While Jesus and Martha continue to talk, I imagine Mary who, deep in thought, quiet and happy, puts on her apron and takes her sister’s place in the kitchen. Martha is generous, industrious, dynamic, but she made a mistake: she is overworked before confronting the Word.

That night Mary—I think—has certainly worked a lot and so showed that the time devoted to listening to the Word of God is not lost or stolen from the brothers and sisters. Who listens to Christ does not forget the commitment to people: he/she learns to do it the right way … without agitation.